Scot Lane smells
christine ackland
As a kid I lived on Scot Lane and where the stadium is now there used to be a sewerage pumping station and a path which led down to the canal and by the canal was the bone works. Further down the road just before the beginning of Marsh Green there was also a council tip which we used to call the Gant...anyone remember the Gant???..The smells from these three places was something else but it never deterred us kids from playing around there. My mum forbid to go anywhere near the tip (gant) and of course that was a red rag to a bull. I'm sure health and safety would have a lot to say about it these days, but guess what.... we had very few illnesses even with all that was floating about in the air. Happy days.

I don't remember a bone works there ( not saying there wasn't one there ) , I do remember one along the canal at Apply Bridge , the rest I do remember , we called it the sewage pad , we used to go down there shooting rats with air guns , ( or shooting at them ) . At the end of Scott Lane was "Harry Horton's Lodge ", were we used to fish there , also in the lodges of Walthew House brick works , the track/road came out at the side of Hizizizi. We used to catch Salamander lizards , take them home ' cos someone said they were baby dragons . It was a day out from Norly.

Hizizizi. Is that you sneezing?

When they built the catalogue place there, they buried all the newts.

Mac , surly you mean baby dragons . PS it should have read Hinziziziz .

I cant remember what year it was 70s . The mail order place caught fire. They chucked a load of lego/sticklebricks out. Kids from round the area all had a set. Happy days

Sammy seals clogged up the canal.

Champion wrote:I cant remember what year it was 70s .  The mail order place caught fire.  They chucked a load of lego/sticklebricks out.  Kids from round the area all had a set. Happy days

Was that not the late sixties early seventies? I remember kids getting smoke damaged large talking Bugs Bunnies from there. They dumped thousands of pounds worth of stuff after the fire.

John Englands was it then?

Yes, I had to look it up to find out. I thought it was GUS. Seems it wasn't the same warehouse, nor the same company. Or was it?

Rylands Mill was on fire.

Spent many day ont gant looking for wheels for making trolleys, bone works was
called Gallagher's st Joseph's school played foot ball near Gallagher's , the sewerage
path leading to the white bridge at the canal, had two houses half way down, we could
never work out why as they were in the middle of nowhere with no street lighting etc

John Englands was near the park. Rylands Gus was the distribution Centre at Martland mill. John Englands and a few other like Kays were swallowed up by GUS I think. There were a lot of catalogues around in the 60s . Littlewoods as well

swimming baths
Kathleen
"In my time, they’ve had three different baths in Wigan. That’s how well off they are. The first one had stable doors where you had to change. Then they got another one but it wasn’t quite Olympic size. Now they’ve got another. The diving boards were brilliant. The whistle would blow and you had to move out".

Didn't they have Turkish baths is the old baths of the 60s.

They had Turkish baths in the 50's..my Dad used to go there.

G.U.S (Great Universal Stores) at Martland Mill, was built in 1976

Scot Lane School long gone but fond memories...Mr Gregory was the head and Miss Roscoe was the loveliest Junior 3 teacher. I learned a lot from her, she gave me lots of her time because I wanted to learn..
_________________
Awwww bless

swimming baths
Kathleen
"In my time, they’ve had three different baths in Wigan. That’s how well off they are. The first one had stable doors where you had to change. Then they got another one but it wasn’t quite Olympic size. Now they’ve got another. The diving boards were brilliant. The whistle would blow and you had to move out".

Didn't they have Turkish baths is the old baths of the 60s.

All our wigan yesterdays. Clogs

END OF AN ERA

Wigan's last clog maker is hanging up his hammer and closing the family's 104 year-old business.
A drastic fall off in trade has persuaded Walter Hurst to put up the shutters for the last time.
But he's proud that the very last pair of clogs he made are on the feet of his two year-old grandaughter, Molly.
Walter, 62, has spent his life making clogs and repairing shoes. But in a new century, the demand for the traditional Lancashire footwear and for shoes to be repaired, has almost disappeared.
Said Walter, "We've been making clogs for over a century, but what's the use of going on?
"my son didn't want to come into the business and although I have been trying to sell the shop as a going concern for a couple of years, it's been futile. It's time to go."
Walter, who has appeared many times on TV demonstrating the art of clogmaking, is one of Hindley's most enduring shopkeepers and the premises on Wigan Road have remained unaltered for decades.
He laughed, "Once, the Health and Safety people tried to get me to put things straight.
"I did a bit of dusting and they siad Ok."
Walter who still uses the hammer belonging to his clogmaking grandfather, said the business used to have six clogmakers when the heavyweight footwear was in demand from miners and mill workers.
He added, "The industry disappeared years ago, so I concentrated on making clogs and have had orders from all over the world.But it seems even clog dancing is going out of fashion."
Walter and his wife, Pam, both agreed that the last pair of clogs should be made for their first grandchild who has been staying with them with mum, Ann, 29, and her partner, Keith, 36, who live in Victoria Australia. 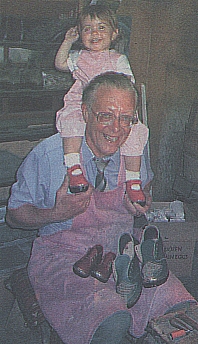 Sad that Walter died shortly after his retirement.

I remember wearing clogs as a kid. They were really comfortable.

One day when I came home on a holiday from Canada, in the 80's, I think, I went up to the top of the Weind to a shop on the right hand side. I bought some memorabilia from the shop owner who said that he had only recently bought the shop and changed the stock. He showed me some clog irons that he had found in the cellar as the shop had previously been a clog makers or something similar, I can't remember. Anyway he gave me some clog irons and I still have them to this day. Genuine Wigan clog irons....

Walter made headlines at the BBC.