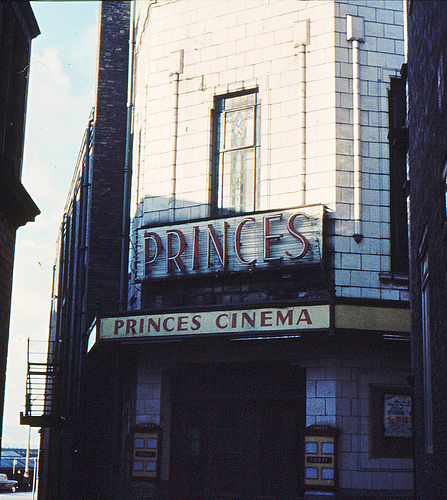 Two bits of info on the cinima.


The Kings Electric Theatre was the first purpose-built cinema in Wigan town centre. Erected by United Electric Theatres Ltd. it opened on 1st May 1911, with live acts appearing with the films, with music by the resident Kings London Orchestra, directed by Walter Moore.

The first manager, Will Clark, was replaced after a few months by Walter Smith, a well-known comedian. In December 1919 a new company, The Elite Theatre (Wigan) Ltd. took over the lease.

The Kings Electric Theatre closed in 1922 and yet another company, The Princes Cinema Ltd. was formed in the December, financed with a £4,000 mortgage. The cinema re-opened with “Little Lord Fauntleroy”, starring Mary Pickford. Mr H. Baker was appointed manager, and the name changed to New Princes Cinema.

Live entertainment continued to be part of the attractions for several more years.

The last silent film was “The Two Loves”, with Ronald Coleman and Vilma Banky. Sound equipment costing £6,000 was installed and the New Princes Cinema was the first cinema in Wigan to show a ‘talkie’, “Show Boat”, with Laura La Plante, on 19th August 1929.

In May 1932 manager Maurice Carr faced an unusual problem when stories started circulating about an infestation of vermin. He was so outraged that he offered a £100 reward for information as to who had started these rumours, and announced to the local press that the building was open to inspection at any time.

However, even without that issue, the New Princes Cinema was beginning to become something of a ‘white elephant’. It changed hands again in 1933 when it was acquired by Falcon Pictures, a syndicate of local businessmen. The cinema was demolished and replaced, on an adjacent plot, by a completely new Princes Cinema

After the Kings Electric Theatre/New Princes Cinema had been demolished the Princes Cinema, built at a cost of £30,000, arose in its place. This new cinema was funded by Falcon Pictures, a syndicate of local businessmen. It was a most attractive building, though hard to fully appreciate due to its position in the narrow passage, off Wallgate, next to the Clarence Hotel. Nevertheless, neon lighting and floodlights made the best of the situation.Always something of a ‘hot potato’, the Princes Cinema had moved on again by December 1935, having been acquired by George Wilson. From him, ownership moved to Buxton Theatres in January 1939. Harry Buxton, the dynamic chairman, said that up to £5,000 was to be spent modernising the five year old cinema, with a new heating system and wiring for television reception. Under this go-ahead management the cinema acquired a reputation for its expert publicity stunts, talent contests and live acts.

After the war the cinema came under the ownership of James Brennan Theatres.

When the ‘X’ certificate was introduced the Princes Cinema developed a practice of showing controversial films, though there was criticism from the local Watch Committee that they were, at times, used as ‘stooges’ to imply that films were racier that they actually were!

But even sex, violence and controversy couldn’t save the Princes Cinema in the end, and it closed on 10th January 1970 with “The Mad Room”, starring Shelley Winters and Stella Stevens.

The building has since been used, off and on between periods when its future has been threatened, as a cabaret club and disco.

It was always cold in there. They had a big red setee. so big that a shorty like me couldn't reach the floor with feet

We didn't have central heating at home just a coal fire so we never noticed other places being cold.

Plus me Mam said don't take your jacket off in the pictures cos you'll run out and leave it when it's finished.

I found that very interesting,having been there many times in the forties and fifties,thank you.