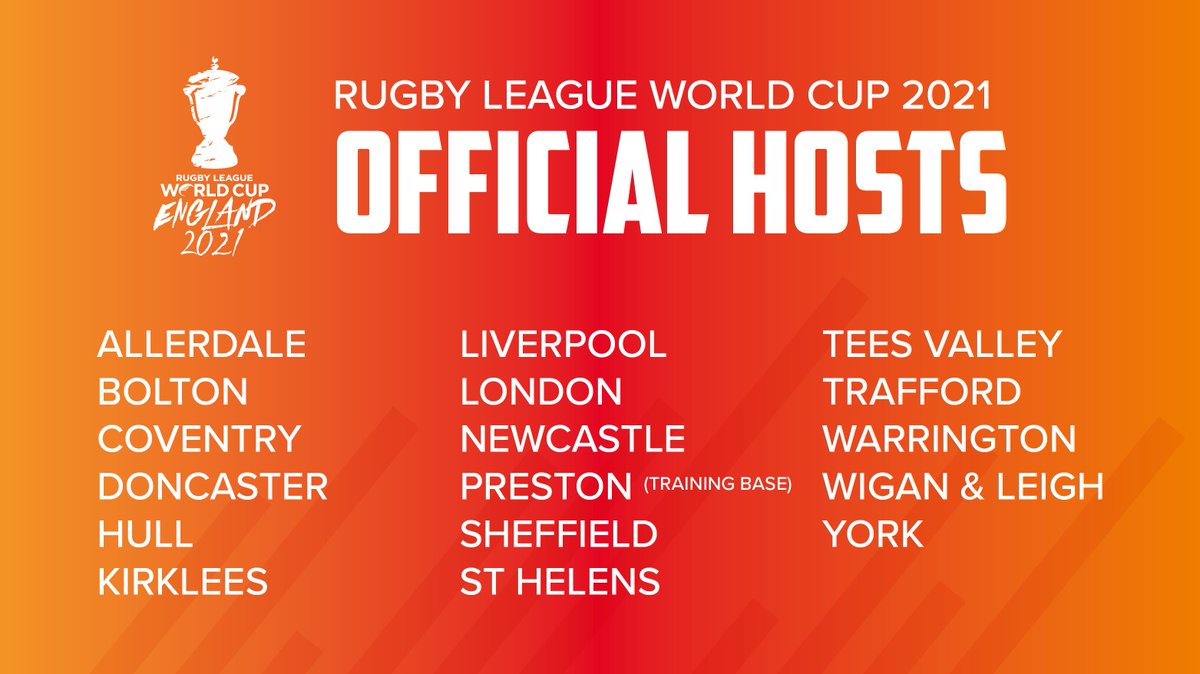 Nothing at the DW stadium then.

The leader of Wigan Council has strongly criticised sporting authorities after the town was not selected as a host venue for the 2021 Rugby League World Cup.

A stunned Coun David Molyneux said he was "extremely disappointed" Wigan's DW Stadium had not been chosen for the tournament and he found the decision inexplicable.


The omission is baffling due to Wigan's pedigree and fame in the sport, he said.

The borough will not totally miss out on the global celebration of the 13-man code, though, as the Leigh Sports Village (LSV) will host three matches.

Coun Molyneux said: “I am extremely disappointed and I can’t understand why Wigan, the home to one of the most famous teams in the world, was not given any games to host throughout the tournament.

I hope its ready on time to host their games.

If councillor Molyneux wants to split hairs about Leigh Sports Village not being in "the town of Wigan",  then neither is the DW Stadium !

P.S. I'd have picked DW Stadium before Bolton, ffs!

@lisanandy
Follow Follow @lisanandy
More
Shocked and deeply disappointed that @RLWC2021 have snubbed Wigan’s bid to host the Rugby League World Cup. The bid was strongly backed by @WiganCouncil and the public. As a leader in the sport and home to one of the best teams in the world, it’s an inexplicable decision

Sir Bob wrote:Maybe the reason is that the RFL know that by 2021 there is a good possibility that rugby will no longer be being played at the DW

The council will do whatever they can to make sure it is.
It's part of the agreement!

Chief executive of Leigh Sports Village (LSV), Simon Toon, said: “This is absolutely fantastic news for us and we are really proud our stadium has been recognised and chosen for multiple games.


“We can’t wait to host thousands of international visitors and show them what Leigh has to offer.

“Our stadium, facilities and our passion for the game will certainly help to deliver a successful Rugby League World Cup and we’re sure all who come to LSV will have a great experience.”

Why are they upset, Wigan isn't the be all and end all of RL.

Lisa Nandy is about as interested in RL as Mr Humphries (I'm Free!)

They did say they want to have the games in “ the heartland” of Rugby League and I , being a biased Wigan fan, would say Wigan is the epicentre of that area. Good luck to Leigh.

You would think some games would be held in Yorkshire ,seeing as that's where the sport was born

Mac wrote:You would think some games would be held in Yorkshire ,seeing as that's where the sport was born

Bollocks thee!  The sport was obviously 'born' in Rugby!  Doooohhhh!!

The RUGBY LEAGUE sport. You dolt!


(If you want pedantry, football is the Father of Rugby)

No. Sorry. Football is definitely not the father of Rugby!

As I said, Rugby is 'the sport',  Rugby league is a variation of that sport.

Please explain how the game of Rugby came about?

League Rugby League is the sport

No.  RUGBY is a sport.  Rugby League is a derivative of the original sport of Rugby.

'Rugby', as we know it, was born in a school in Rugby, hence the name.

Ok, I will answer seeing as you are waffling.

Rugby was born in 1823 when William Webb Ellis "with fine disregard for the rules of football as played in his time at Rugby school, first took the ball in his arms and ran with it, thus originating the distinctive feature of the Rugby game" ...
Thus Rugby can be seen as a derivation of the game of Football. (Rugby football) Rugby union is classed as a different sport to football. In terms of game play, Rugby League is classed as a different sport to Union

I'm not bothered what it's 'classed as'.   Rugby is a sport.  Rugby League is a dirivative of Rugby.

You may not be, others are. Union and League are sports in their own right

Psssst....Now I've got you miffed

Not at all.  Your link does, actually, prove that I'm correct.

"Rugby League is NOT officially a sport".  Whereas, Rugby is!