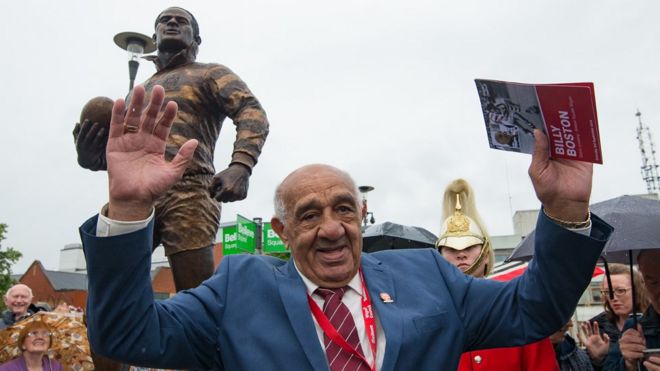 Born in Tiger Bay in Cardiff in 1934, Billy Boston learnt his trade in rugby union before switching codes at the age of 19
He was snapped up by Wigan after impressive performances at the Catterick-based Royal Signals
Boston earned hero status at Wigan with his pace and often ran rings around opponents
He won three Challenge Cups and an RFL Championship title in 1960
He also scored 24 tries in 31 appearances for Great Britain and was a member of the team that won the 1960 World Cup

A legend. He did Wigan proud. I never knew he finished his Career at Blackpool Borough. Have a great day mate

I remember going with my mates to the ‘Hen Pen’ in Central Park in the 1950’s to watch Billy Boston, also the likes of Eric Ashton and Brian McTigue, happy days.
Best Wishes to Billy.

Met a man from St Helens today.  A young man.  I told him that it was BB birthday today.  I expected him to laugh. and say he'd never heard of him.  Quite the opposite, he knew who he was and admired him.

Sadly, I wanted it to be posted over there before ray did, Tomp couldn't as he was busy, and Tonker is in Mora.
Ray is using this as an advert for his forum, a watering down of an already small pool., but hey, his choice.
Did no one notice his edit on the hobbies thread, where he stated he was on WR private messaging users to join his forum?
I stopped his PM's, he wasn't banned or he would have had no need to delete his account, as there wouldn't have been one to delete.

For the record, the site was mine, is mine and will still be mine. I set it up, built it around members, Eront was moderator, I had overall control.

This is the page gaffer suggests he would sue me over.

raymyjamie wrote:I remember going with my mates to the ‘Hen Pen’ in Central Park in the 1950’s to watch Billy Boston, also the likes of Eric Ashton and Brian McTigue, happy days.
Best Wishes to Billy.

I also attended the Hen Pen, then climbed over the wall into the higher priced stands, as most did, to watch our hero Billy and the team, ten later on in life I worked in the refubishment of the ' Billy Boston stand at Central Park, I have never forgiven them for selling it to tesco,