The Buffalo Soldiers were African American troops who served on the Western frontier after the Civil War. But their legacy is complicated.
You may have heard the term “Buffalo Soldier” from the famous Bob Marley song with the same name. But it was actually a real nickname given to men in the all-Black U.S. Army regiments who served in the Western frontier after the Civil War.

The Buffalo Soldiers were tasked with controlling the Native Americans of the Plains, capturing cattle rustlers and thieves, and protecting settlers. Despite enduring severe racism, they became legendary for fighting courageously — and for expanding America westward. 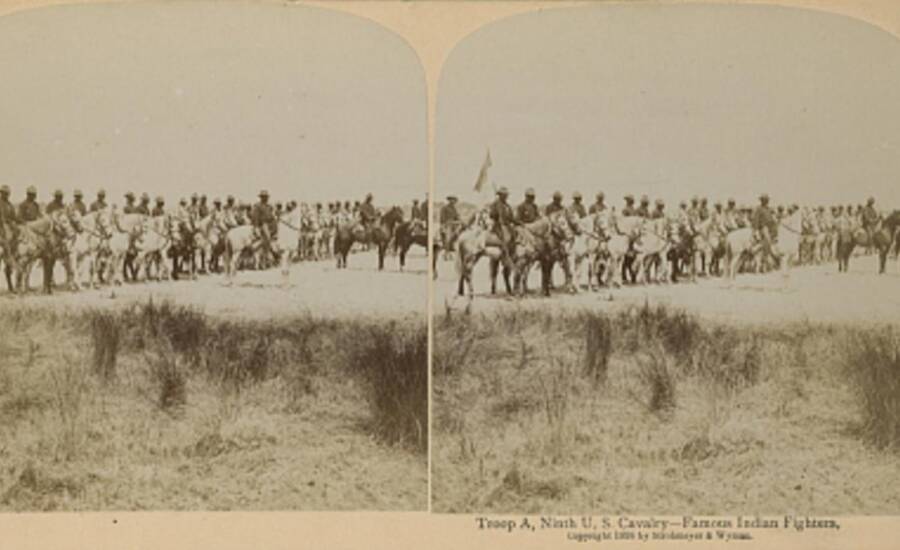 The Buffalo Soldiers were all-Black army regiments stationed west of the Mississippi River.

After the Civil War ended on April 9, 1865, the U.S. Congress allowed African Americans to join the army during peacetime as soldiers.

Many Black people jumped at the opportunity. They hoped that serving their country would shield them from poverty and racism.

But treating Black soldiers equally was the last thing on the government’s mind. African Americans who enlisted in the army were segregated into six all-Black regiments. These were eventually melded into four Black regiments, made up of two infantry units (the 24th and 25th Infantry) and two cavalry units (the 9th and 10th Cavalry).

The regiments were usually commanded by whites, and the rank and file faced racial prejudice from the army establishment. Many officers, such as George Armstrong Custer, refused to command Black soldiers at all — even if it cost them promotions in rank.

“He said they wouldn’t fight, that they were afraid and that they’d run,” said John Smith, a descendant of Buffalo Soldier Sgt. Charles Smith, in 1996.

He couldn’t have been more wrong.


Buffalo Soldiers And The Native Americans 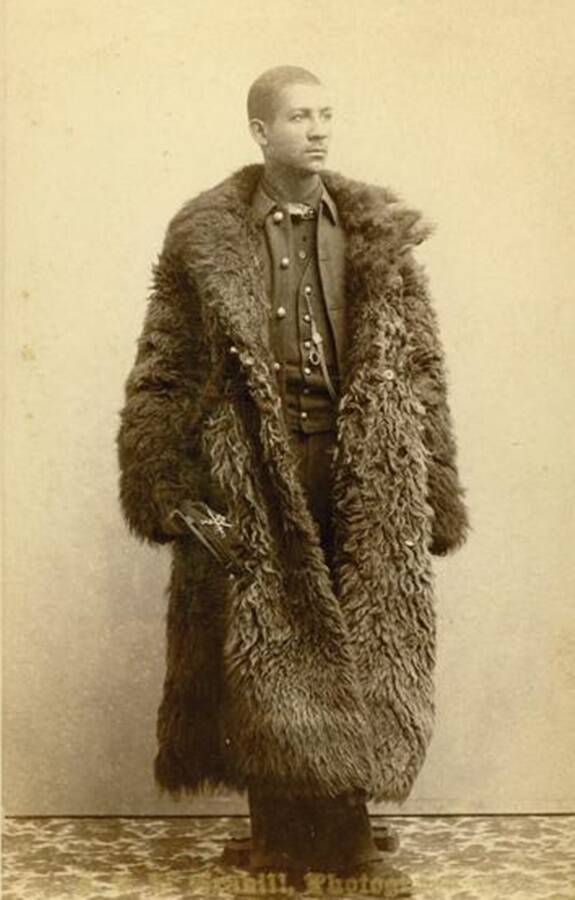 The U.S. dispatched these Black troops, who made up roughly a tenth of the armed forces, toward the West. At the beginning, Black soldiers were only stationed at locations west of the Mississippi River, where most towns were still underdeveloped.
According to the National Museum of African American History and Culture, “Many whites didn’t want to see armed Black soldiers in or near their communities.”

It’s unclear why the Indigenous warriors coined the name, but it’s suspected that it was either a reference to the Black soldiers’ dark curly hair or their strategic military fare, both of which the Natives associated with the mighty buffalo.

Either way, buffalos are revered in many Native American tribes, so the nickname was considered a sign of respect toward the Black troops.

Perhaps the most notable member of the regiments was Lt. Henry Ossian Flipper, who was the first Black graduate of West Point in 1877.

Upon his graduation, Flipper was commissioned as a second lieutenant and assigned to the 10th Cavalry Regiment, making him the first Black officer to command soldiers in the regular U.S. Army. 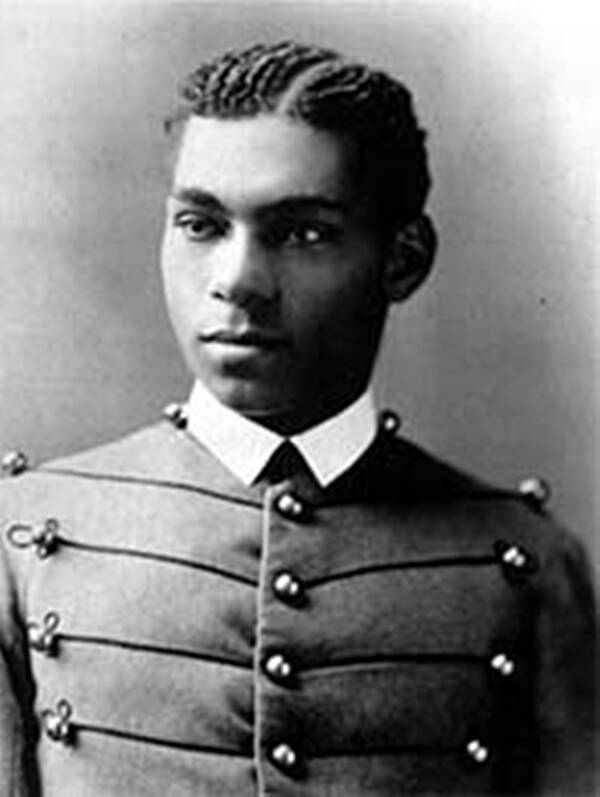 The Buffalo Soldiers saw frequent battles in the West, especially during the American-Indian Wars in the late 19th century. Sometimes, skirmishes broke out without any warning at all.

“I was sent with a detail with 12 of my men to carry the mail to Fort Bliss. At Eagle Springs, we were attacked by 100 Apaches. The fight lasted several hours.”


However, other battles were more or less planned. During an 1874 campaign by the U.S. government to displace Natives who inhabited the Southern Plains, the Buffalo Soldiers fought against Indigenous tribes who occupied the area. This included the Comanche, Southern Cheyenne, Kiowa, and Arapaho tribes.

The war marked the end of free-roaming Native Americans in the entire region. 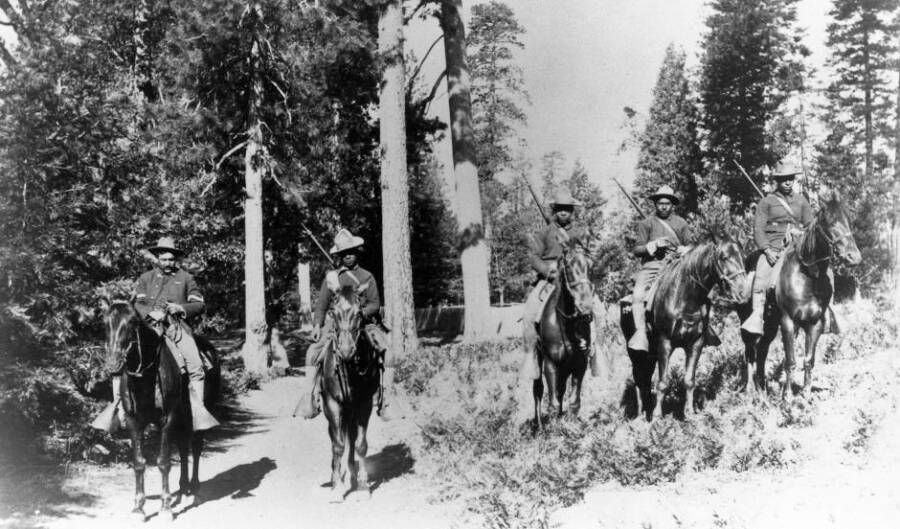 In addition to guarding the frontlines of the Western Frontier, the Buffalo Soldiers acted as some of the nation’s first park rangers.

Before the formation of the National Park Service, the U.S. Army served as the official administrator of the country’s national parks. The U.S. Army oversaw Yosemite between 1891 and 1913.

In the spring of 1899, Buffalo Soldiers stationed at The Presidio of San Francisco embarked on a two-week journey to Yosemite National Park to oversee the grounds. Aside from building roads, these soldiers also fought fires, caught poachers, and enforced penalties for people who violated park rules.

Among their accomplishments within the parks were building the first usable road into the Giant Forest at Sequoia Park and constructing the first trail to the top of Mt. Whitney, the tallest peak in the U.S.

As time went on, Buffalo Soldiers were allowed to work in other places besides just the desolate Western frontier. In 1898, they fought in the Battle of San Juan Hill during the Spanish-American War. And in 1918, they helped enforce security at the border between the U.S. and Mexico during the Battle of Ambos Nogales.

But Black soldiers still had a long way to go before they were treated equally by the army.

The Legacy Of The Buffalo Soldiers 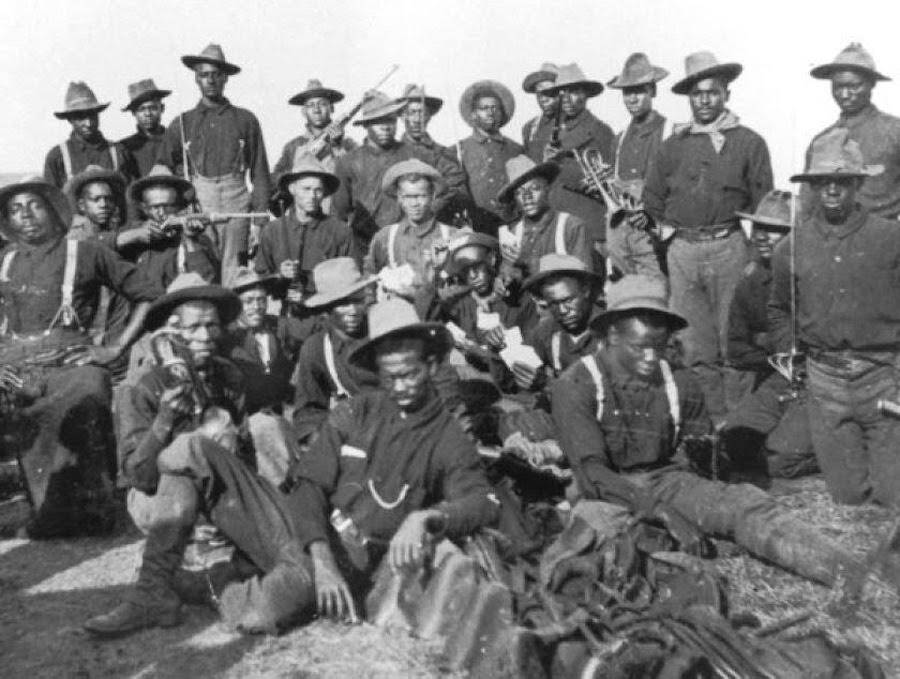 Buffalo Soldiers during the Spanish-American War.

The Buffalo Soldiers are most often remembered for their bloody battles during the American-Indian Wars. These conflicts ended with many Native Americans being forced to surrender their land and uproot their families to reservations.

Eighteen African American Buffalo Soldiers earned Medals of Honor for their service during this period.

Contemporary historians underline the irony of Black soldiers seizing Native lands while the soldiers themselves were discriminated against for being African American. However, it’s also important to remember that the soldiers were often being instructed by their white superiors to follow these orders, so they didn’t have much of a choice if they wanted to keep their jobs.

It’s also worth keeping in mind that the fraught history between African Americans and Native Americans stretches much further back to a time even before the Civil War.

“We have to be honest about the reality that some tribes owned slaves, took on slaves in order to assimilate into the United States culture,” said Colette Yellow Robe, co-chair of the Native American Women’s Task Force in Nebraska, whose work has touched on promoting solidarity between Black Americans and Native Americans.

For African Americans, both free men and those formerly enslaved, joining the military was supposed to be a way to escape discrimination. Unfortunately, even with valiant contributions by the Buffalo Soldiers who built up the American West, the military remained segregated until the Korean War.

As awareness about the forgotten contributions of Black service members grows, efforts to honor them have come to the forefront in preserving U.S. history, including the story of the mighty Buffalo Soldiers.